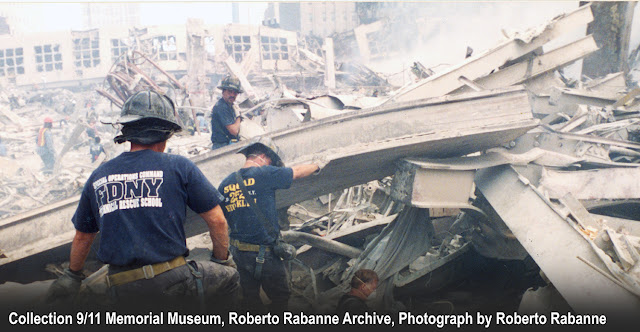 Richard Marrone is a career veteran with the NY Fire Department, an active Emergency Medical Technician for the FDNY and a first responder at 9/11.  He spent a significant amount of time in Ground Zero since the attack treating all responders and civilian victims while being directly exposed to the deadly air and toxic dust that affected (and continue to affect) so many thousands. His 9/11 experiences alongside all his colleagues in the FDNY, NYPD and other city workers who risked their very lives and well-being are now part of an ongoing health concern as supported by The James L. Zadroga 9/11 Health & Compensation Act and public programs like the WTC Health program and the Victims Compensation Fund alongside an extensive list of other dedicated organizations. (see list of charitable funds). 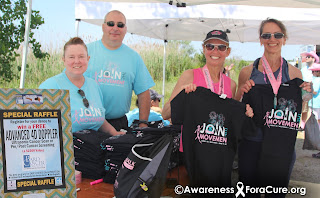 IGNITING THE NEW 9/11 CANCER RESOURCE MISSION
In June of 2018, Mr. Marrone and wife Gina volunteered at an LI2DAY breast cancer fundraiser in Shirley, Long Island.  They were assigned to manage the raffle table where one of the prizes was a cancer screening at an advanced cancer imaging facility @ Bard Cancer Diagnostics endorsed by Awareness for a Cure (AFAC) and the NY Cancer Resource Alliance (NYCRA).  As caregivers to cancer survivors, it did not take long for the Marrones to engage the medical sponsors and inquire about the scanning technology on the raffle table-- a 3D/4D Doppler Ultrasonic Cancer program donated and conducted Dr. Robert bard himself (one of the industry’s pioneers in advanced cancer imaging technology.)

As a city employee, Mr. Marrone was part of the first groups to be certified with the World Trade Center Health Program.  Moreover, he maintained a proactive level of caution about regular checkups in response to the high levels of toxicity potential carcinogens in the 9/11 dust that plagued everyone exposed.  He expressed even more concern about the many new “surprise” cancer cases that are now beginning to appear, 15+ years later.   Being an EMT as well as having continued health concerns from his experiences in Ground Zero, Mr. Marrone’s interest and personal insight to the concerns of ALL responders led to deeper exchange with the cancer imaging directors and soon became the establishment of a major public health outreach project and support network called the 911CancerScan program. "Being a ground zero worker seems like we all have this life-long target on our backs that at any given moment, something is going to hit us - we just don't know WHEN", says Mr. Marrone. "The best thing you could do for yourself is to stay on top of your checkups, keep asking a lot of questions and stay alert for trends in the news as far as what's in recent health reports."

(See more about GETTING CERTIFIED)

BUILT AND INSPIRED BY CAREGIVERS 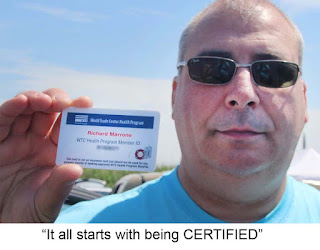 AFAC co-founder Dr. Jesse Stoff and other medical colleagues gained tremendous understanding from the public presence of organizations such as the FealGood Foundation (an international advocacy and fundraising group for 9/11 responders) and united more allies to better reach and help the many survivors of the WTC disaster.  As part of a collaborative effort, Dr. Stoff witnessed firsthand a new influx of cancer patients in his office and in the news as a sign of the impending "dormant cancers" finally coming out.

Another connection who contributed valuable insight to the establishment of this 9/11 Cancer resource was Mr. Michael Barasch (of Barasch & McGarry, NYC) - a seasoned attorney whose career became focused on the many related cases affected by ground zero. Mr. Barasch is recognized in the community for his extensive knowledge, his guidance and support in helping individuals get certified towards receiving the right healthcare and compensation.  His law firm is busier than ever because of the (still) unreported victims who need certification and the many new cases of cancer and other types of  illnesses from 9/11. 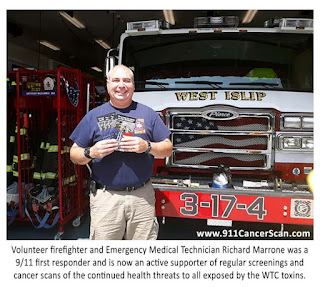 "I know that there was a latency period", says Mr. Barasch. "There's a real danger because while the Heath Program was reauthorized for 70 years, the victim fund, the compensation fund was only authorized for five years, and it's going to expire at the end of 2020. Well, guess what? The doctors tell me and I'm seeing it in my office, people continue to get sick, to get cancers, and to die at alarming rates... Congress has to do the right thing by extending the victim compensation fund, because people aren't going to stop getting sick, they're certainly not going to stop dying. So we've got to take care of these families whose spouse, whose father, whose husband, or whatever it is... the only thing these people did wrong was believe the EPA when they said the area is safe."

Empowered by the strength of an alliance with such experienced crusaders came a local outreach effort and the published reports of new numbers of cancer cases from the CDC indicating the rising health risks to all 9/11 related patients.  AFAC also began connecting with more and more responders (firefighters in particular) in part to review the community’s well-being with regard to the many public and private treatment options they have undergone.

Another ingredient that helped establish the 911CancerScan program design was inspired by various non-profit foundations. Gilda’s Club of NYC, an endorsed partner of AFAC carried the legacy of the late Gilda Radner and her worldwide message of patient advocacy.  Director Lennard Gettz crafted a program uniting this message of seeking efficient professionals with advanced credentials and offering greater resources to provide alternative support (alongside all existing solutions) and a SECOND OPINION with the hopes of bringing new answers to those touched by cancer. It is this very philosophy that helped to drive the introduction of modalities such as Cancer Immunology, Insulin Potentiation Therapy, Chelation Therapy, Genetic Testing and a host of other non-invasive advancements and innovations that are outside of the conventional menu of clinical cancer treatments.

Patient advocacy responds to anyone concerned about pending illnesses (like Cancer) or have been recently diagnosed. The 9/11 CancerScan program was established to support the philosophy of THE SECOND OPINION. For anyone curious about what other treatment options another oncologist might prescribe, this program invites the opportunity to safely receive one of a variety of advanced diagnostic scanning or (non-invasive) screening exams and get a fresh new diagnostic perspective to  your health status.  For any patient seeking peace of mind or at least a wider perspective on a major commitment as cancer care, this additional resource brings added confidence and more intelligent decision-making by expanding the list of professional options on the patient's side.