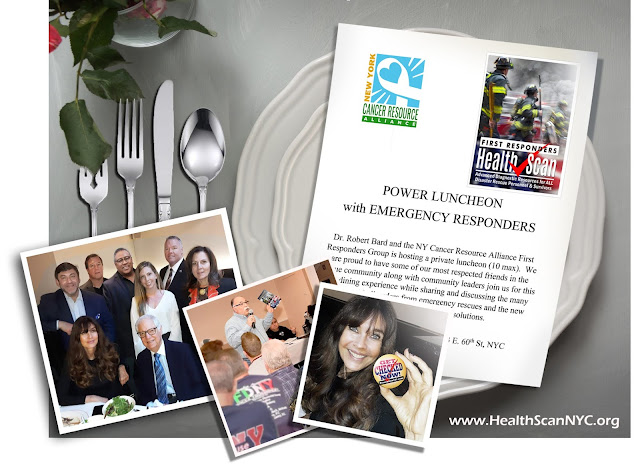 PILOT POWER-LUNCHEON MEETING #1
November 8, 2019 marked the first coordinated assembly of community-minded New Yorkers brought together to discuss the major concerns relating to public health and wellness among first responders. This conference pilot was produced by the NY Cancer Resource Alliance or NYCRA (a health education-based LINKEDIN group) and sponsored by AngioFoundation director Dr. Robert L. Bard. Hosted at world renowned Philippe’s of NYC, this power luncheon was designed to promote dynamic exchange between all guests while setting the precedence for future collaborations. “The profound success of this special meeting-of-the-minds came from the strategic grouping of inspired individuals from different areas of interest”, said featured guest FDNY Peer Counselor/ Retired Captain L103 CASEY POLITI. “…synergy was automatic because we all related deeply in our own individual ways about first responders, cancer and survivorship”.

Other main guests included Director of Medical Operations /NY State Trooper Surgeons PBA MICHAEL BROOKS (Albany, NY) and Mrs. Mary Paterson, supporter of NY rescuers and wife of the 55th NYS Governor David Paterson.  Both were invited because of their state government perspectives which opened wider insight and resource information about healthcare challenges of state and city government safety workers. The next speaker was celebrity wellness author and producer CAROL ALT who graced the discussion with her vast experience in Prevention and Early Detection alongside her life-long support for the FDNY.  Meanwhile, on the healthcare side was leading cancer diagnostic specialist DR. ROBERT BARD, NYCRA mental health advisor JESSICA GLYNN, LCSW and physician DR. GEORGE LIAKEAS (provider of IvyGene cancer blood testing in NYC)- chosen for their clinical perspectives on clinical matters.  Together, they formed the first Round Table Leadership Collaboration group.


ALLIANCE BUILT ON THE MOST VITAL COMMON GROUND
The dynamic group was quick to engage and connect with each other. Carol Alt kick-started the discussion about the loss of her father, Fire Battalion Chief Anthony Alt who died (1983) of cancer from the NY Tel exchange fire of 1975. This was pivotal in her educational crusade to promote wellness education as well as her tremendous support for the FDNY Foundation. “I’ve been a patient of Dr. Bard’s for over 20 years… he’s one of the top authorities in diagnostic science who teaches doctors all over the globe about this cutting edge cancer scanning technology-- the kind that really makes a difference”, starts Ms. Alt. “...I get screening all the time because I live in Tribecca- where people in that area are now having issues since 9/11 when the EPA told us all that it was safe to go back in our homes. My father would be alive today if he would have known to get early screenings like this.” 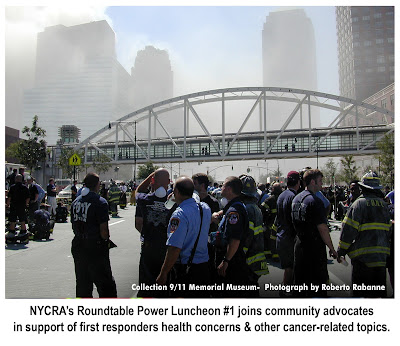 One of NYCRA’s many listed scanning resources available is IVYGENE- a dedicated blood test developed to scan for cancers. Dr. George Liakeas is a NYC based physician and specialized IvyGene provider who supports all local 9/11 responders through this proven effective modality of cancer scanning. He is a recent ally of the First Responders cancer resource project and Dr. Bard’s CancerScan practice as an alternative screening solution for patients.

As one of the top supporting members of the first responders cancer awareness program, Dr. Bard dedicated much of his career in support of firefighters’ health concerns through the use of technology (like the advanced 4D Doppler Ultrasound) to target and analyze complex cases of cancers. In addition, commitment to responders’ health also drove other research works including the study of PTSD symptoms through the use of the Transcranial Ultrasound (more commonly used in Europe). This formed new partnerships with a list of experts in behavioral and psychological sciences. Psychotherapist and cancer survivor coach Jessica Glynn opened the pressing topics of mental illnesses and psychological issues that are a leading concern among a number of responder groups. “I am so impressed with NYCRA’s holistic and integrative views on wellness- and including significant attention to mental health… PTSD in particular as well as neurocognitive disorders have recently reached some alarming numbers in the rescue community and they’re being linked to occupational hazards,” says Ms. Glynn.

BUILDING A NEW COMMUNITY FORUM
The origins of this community round table concept came about at the Ch11 WPIX newsroom in May of 2019 when Dr. Bard first met with the 55th Governor of NY David Paterson and wife Mary while waiting to go on air for their own respective interviews. (see 5/2019 Ch11 photo elements) They immediately connected on vital matters including 9/11 health issues and  NYCRA's First Responders Cancer program where the governor's interest and the exchange stayed in earnest. "I am so proud to learn about the governor including his continued support for all New Yorkers", says Dr. Bard. "Discussing matters like first responders health issues was such a valued topic to him that he inspired us to reach out to other community leaders and to create forums like these luncheons!"

Six months from that fateful exchange, the first community meeting was launched and Mrs. Paterson attended on the governor's behalf, whom herself contributed some valuable topics and ideas to the circle.  “Continuance of these meetings is so vital to the safety and health interests of our public service workers as well as for our community at large… it’s one thing to ‘never forget’ but it’s even more crucial that we stay current about issues like 9/11 health effects”, stated Mrs. Paterson.


ABOUT NYCRA
Since 2017, the NY Cancer Resource Alliance has been producing collaborative programs between its active members- including medical providers, patient advocates, teachers, researchers and cancer survivors. Founded by medical publisher and patient advocate Lennard Gettz, “the alliance” has actively conducted educational seminars, published newsletters and co-promoted countless cancer fundraisers. NYCRA also catalogues and shares all available cancer resources for free public access as part of the “empowerment through education” mission. Pilot programs like the Round Table Leadership series is the next stage of info-sharing between a wide array of group leaders and public advocates to address the top focal issues and health concerns in our community.
at November 13, 2019